Bioremediation is a treatment process that uses naturally occurring microorganisms (yeast, fungi, or bacteria) and plants to break down, or degrade, hazardous substances into less toxic or nontoxic substances.

Bioremediation means to use a biological remedy to abate or clean up contamination. This makes it different from remedies where contaminated soil or water is removed for chemical treatment or decontamination, incineration, or burial in a landfill.

Natural bioremediation has been occurring from millions of years. Biodegradation of dead vegetation and dead animals is a kind of bioremediation. It is a natural part of the carbon, nitrogen, and sulphur cycles. When bioremediation is applied by people, microbial biodegradation processes are said to be managed. Microorganisms consume organic substances for nutrients and energy. In chemical terms, "organic" compounds are those that contain carbon and hydrogen atoms. Certain microorganisms can digest organic substances such as fuels or solvents that are hazardous to humans. The microorganisms break down the organic contaminants into harmless products, mainly carbon dioxide and water. Once the contaminants are degraded, the microorganism population is reduced because they have used their entire food source. Dead microorganisms or small populations in the absence of food pose no contamination risk.

Phytoremediation is the use of living green plants for in situ risk reduction or removal of contaminants from contaminated soil, water, sediments, and air. Specially selected or engineered plants are used in the process. Risk reduction can be through a process of removal, degradation of, or containment of a contaminant or a combination of any of these factors. Phytoremediation is energy efficient, aesthetically pleasing method of remediating sites with low to moderate levels of contamination and it can be used in conjunction with other more traditional remedial methods as a finishing step to the remedial process.

The waste water from the major industries of Pakistan includes mostly phenols, phosphates, organic materials, certain types of surfactants, acids and alkanes etc. Various types of microbes and plants have efficient capability of detoxifying these toxic and non- degradable chemicals. However a lot of work is still required to address the issues regarding the industrial effluents. 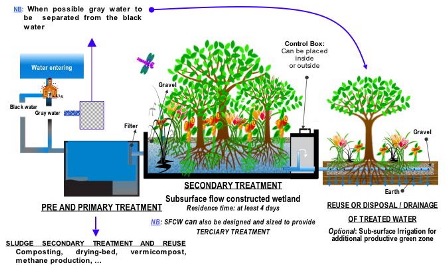